Rajasthan Royals batsman Sanju Samson smashed nine sixers and one four in racking up 74 off 32 balls against Chennai Super Kings in Sharjah on Tuesday night, taking his team to 216 — usually an unbeatable total in T20 cricket, and so it proved this time too.

Samson first made people sit up and take notice back in 2013 as a teenager, when he debuted in the IPL, after coming through the ranks in the domestic circuit. Since then he’s been impressive in the IPL, though he himself wouldn’t be very satisfied with his First-Class record — an average of 37.64 is not impressive for a team’s leading batsman.

A bit of hyperbole

The IPL is here, and it’s the season of hyperbole. Samson’s knock of 74 against CSK sent the experts into paroxysms of delight — Gautam Gambhir called him the most “most talented young batsman in India”, while Tendulkar praised him thus: “Clean striking… They were all proper cricketing shots and not slogs.” Sunil Gavaskar said: “Unbelievable! He Sanju Samson has always had the talent… the last few months he has worked very hard.”

Samson’s talent is unquestionable but the experts, especially Gambhir, seem to have gone a bit overboard. They forgot to account for the quality of bowling that Samson lashed for most of his runs — he scored 36 off 11 balls by two modest domestic level bowlers, Deepak Chahar and Piyush Chawla. He got 22 off 11 balls off Ravindra Jadeja, an effective spinner on helpful tracks — curiously, Jadeja was attempting flighted deliveries instead of his trademark quick balls he darts in. He scored 13 off five balls from Sam Curran, England’s emerging allrounder. Curran was a good challenge for Samson, who capitalised on a short ball from him that he hit for a six.

The bowler who got Samson out was probably the best in CSK’s XI — Lungi Ngidi. Ngidi had a nightmare final over, in which he bowled two no balls and one wide and got slogged for 30 runs by Jofra Archer. But the 6ft 4in Ngidi had kept Samson quiet, conceding only three runs off the five balls he bowled to him. He deceived Samson with a slower ball outside off; Samson fell for it and sent the ball high for a catch at deep cover.

Samson has the talent. The Indian selectors tried to give him international exposure in what seems to be his strongest suit, T20 cricket. He played one T20I in 2015 and three in January this year. With scores of 19, 6, 8 and 2, he did not set the field afire.

Samson is a clean striker of the ball and times his strokes very well. He may yet make his mark in international cricket — for that to happen, he must not let IPL success and hyperbole affect his ambition and focus. 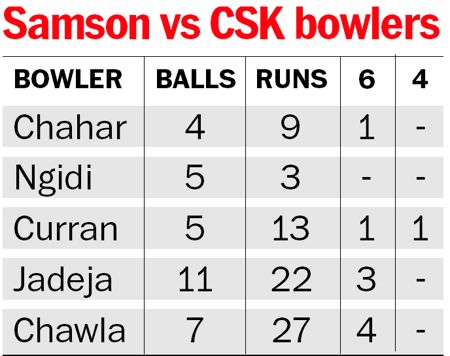